Games of Strategy (Second Edition) 2nd Edition
by Avinash K. Dixit (Author),‎ Susan Skeath (Author)
Now available in a Second Edition, Games of Strategy remains the most accessible principles-level text for courses in game theory, addressing a remarkably broad range of concepts in a narrative that is both clear and compelling. Using resonant real-world examples, the authors simplify difficult theoretic ideas, helping students see the value of strategic thinking in a variety of situations.
The text has been carefully updated for this Second Edition, including thorough revisions of the sections on sequential- and simultaneous-move games and those on voting and auctioning.

This is an inviting introduction to game theory, offering students an engaging, comprehensive view of the discipline without assuming a prior knowledge of economics or complex mathematics (uses only high school algebra). Additionally, instructors will find a variety of useful pedagogical tools in the accompanying Instructor’s Manual, including student exercises and suggested classroom games and experiments.
Editorial Reviews
Review

A marvelous book! Every topic is right on target, and the exposition is extraordinary. You can count me among the many people who will find it the best undergraduate text on the subject. -- Vincent Crawford, University of California-San Diego

Dixit and Skeath recognize the possibility of teaching the concepts of game theory at the earliest stages of the undergraduate curriculum; this is very progressive and praiseworthy. Using Games of Strategy, students everywhere--budding military strategists at Annapolis and economic theorists in training at Chicago alike--will be able to enjoy an early introduction to the field. The generous variety of illustrative specific cases has the effect that what is learned can be more easily retained than if there were only the assertion of theoretical concepts without enlightening examples. -- John F. Nash jr., Princeton University, Nobel Laureate, Economic Sciences

Games of Strategy provides a marvelous introduction to game theory. It is full of engaging examples drawn from economics, political science, and other areas. This book would serve very well as the core text for a nontechnical game theory course in political science departments. -- Robert Powell, University of California-Berkeley

I have long thought that an elementary game theory text was a great idea, and I have reviewed a number of book proposals and manuscripts by economists hoping to produce such a book. Games of Strategy is super, both in its initial objectives and in its execution of them. -- Amanda Bayer, Swarthmore College

Thanks very much for allowing me to use the draft version of Games of Strategy, by Avinash Dixit and Susan Skeath. It is a superb book, probably the best text that I have used in my twelve years as a college professor. My sense is that it quickly will become the most widely used nontechnical introduction to game theory. It is extremely well done. -- Larry Evans, College of William and Mary

To know game theory is to change your lifetime way of thinking. Games of Strategy is a delightful skeleton key to the twenty-first century's emerging culture. -- Paul A. Samuelson, Massachusetts Institute of Technology, Nobel Laureate, Economic Sciences --This text refers to an alternate Hardcover edition.
About the Author

Avinash Dixit is Emeritus John J.F. Sherrerd University Professor of Economics at Princeton University, where he offered his popular freshman course in game theory. He is among the world’s leading economists, having made fundamental contributions in several major fields as well as in game theory. He is the author of many books, including Dixit/Nalebuff: Thinking Strategically (Norton, 1991), Dixit/Pindyck: Investment Under Uncertainty (Princeton University Press, 1994), and Dixit/Nalebuff: The Art of Strategy (Norton, 2009).
Product details

Return are accepted within 30-days from the order date. Returns must be approved in advance by Seller, Returns must be shipped United States Postal Service USPS- Media Mail (ONLY), with delivery Confirmation. 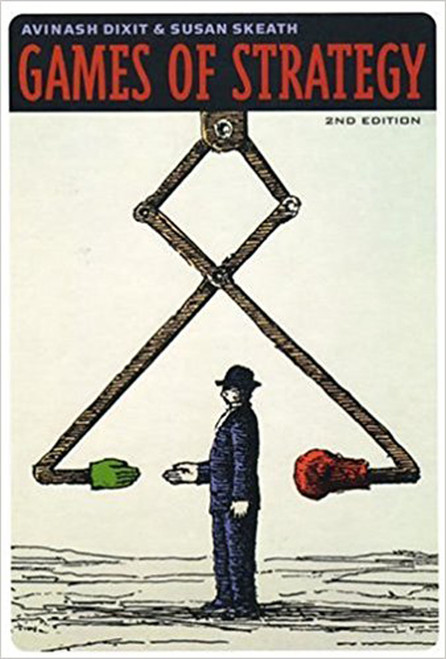